Take this helicopter flight to view the many spectacular sights surrounding Page, Arizona. See Alstrom Point, Lake Powell, Wahweap Marina, Tower Butte, Antelope Island, and parts of the Navajo Nation from your seat in the sky. 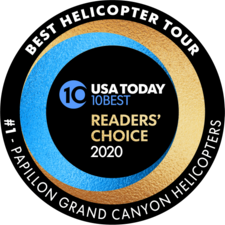 It has been the location of many Hollywood movies, and now you can experience the beauty of Lake Powell, America's second-largest man-made lake. From the seat of your luxury helicopter, view what Mother Nature created over millions of years, as the mighty Colorado River carved its way into the famous red Navajo sandstone. Lake Powell has been the backdrop to many commercials with its iconic landscape, and you will understand why once you have viewed the deep turquoise water of Lake Powell against these extraordinary rock-formations in their different shades of red and white.

Your flight will take you over Wahweap Bay and marina, home to hundreds of houseboats, then continue over Antelope Island, past Castle Rock to Alstrom Point. If you were to take this route by land, the journey to Alstrom Point requires several hours of off-road driving. We will take you there aboard a luxurious helicopter with air-conditioning and panoramic windows, perfect for talking those spectacular selfies to post later. Gunsight Butte will be the next vantage point on this sightseeing excursion, in the shape of a lighthouse, it has become a key landmark for the boaters on Lake Powell.  Next, your pilot will fly over the main arm of Lake Powell to the southern shores to get a close-up view of Tower Butte, the elusive flat-top rock guarding the northwestern part of the largest Native American reservation in the U.S. Lastly, enjoy views above Navajo Canyon, one of the longest and most beautiful side canyons of Lake Powell, and a portion of Antelope Canyon before landing back at Page Municipal Airport.